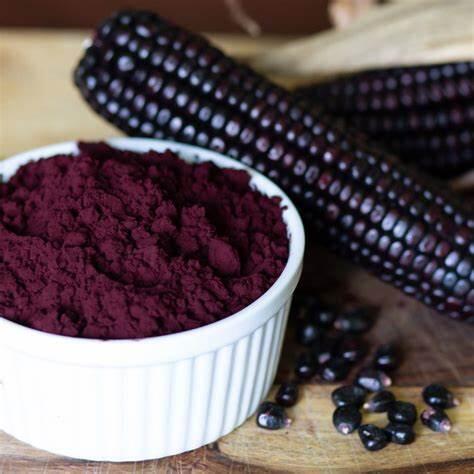 Aogubio purple corn extract, offered in bulk, is ideal for a variety of applications including beverage formulations such as the well-know Peruvian drink “chicha morada,” and is a welcome addition to other functional foods and beverages and dietary supplements. They are suitable for use in capsules, tablets, drink mixes, cosmetics, and more.

The most widely studied polyphenols are flavonoids, which are divided into two major groups, anthocyanins and anthoxanthins. Anthocyanin is a very important water-soluble pigment, which is responsible for giving red, blue, and purple colors to plants.These pigments are widely found in our food, including fruits such as blueberries, cranberries, bilberries, also in eggplant, brown rice, grape skin, purple yam, and purple corn.

Anthocyanin has been widely used throughout the world as food coloring, and since ancient times has been widely used as an herbal medicine that can cure hypertension, fever, liver disorders, diarrhea and dysentery, urinary disorders and influenza. Several previous studies have shown that anthocyanins have high potential bioactivity in the prevention of various chronic diseases such as diabetes and cataracts triggered by diabetes.Anthocyanins can also improve blood lipid profiles and have vasoprotective effects and also have an effect on inhibiting growth and stimulating cell apoptosis cancer.

XI’AN AOGU BIOTECH CO.,LTD is devoted into the research and innovation in natural nutritional supplements ingredients. Our own factory and lab with the strict quality control system to ensure quality stability and real price of Purple corn extract. At the same time, we have our own source for the raw material to make sure the production ability.