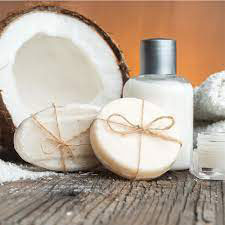 Because we make natural soaps we are sometimes asked about synthetic detergents, and recently in particular about sodium coco sulphate. Before describing sodium coco sulfate I will talk a bit about sodium lauryl sulfate as the two are closely related.

Sodium lauryl sulfate (SLS) is a synthetic detergent used in a wide range of commercial personal care products. These products include shampoos, shower gels, pump dispenser liquid ‘soaps’, and most toothpastes. Unfortunately many so-called ‘natural’ products contain SLS.
SLS belongs to a class of medium to strong surfactants (or ‘surface active agents’) known as the alkyl sulfates. As a group these chemicals have a market advantage of strong cleansing power, high foam production (which people equate with better cleansing – though foaming and cleansing are two quite different things) and very low production cost. Unfortunately they are also skin irritants, in part because they remove protective oils from the skin. In fact sodium lauryl sulfate is something of a gold standard for producing irritation in skin irritation studies.

Understandably many people today are confused about the potential health and environmental hazards associated with surfactants, in particular sodium lauryl (dodecyl) sulfate, sodium laureth (lauryl ether) sulfate and sodium coco sulfate (SLS/SLES/SCS). Some companies claim that SCS is a safer alternative to SLS/SLES since it’s derived from coconuts and not petroleum. Other companies say the SLES is gentler on your skin because it goes through the additional process of ethoxylation. I figured it was time to dig out what science has to say so you can form your own opinion on the matter.

SLS/SLES both start out using one fatty acid called lauric acid which is usually sourced from petroleum oil but sometimes from coconut or palm oil. Lauric acid is converted to lauryl alcohol and SLS is created. SLS is a known skin irritant so it’s put through the additional process of ethoxylation to make it more gentle. In fact SLS is used by scientists to irritate the skin of animals and human volunteers in order to test the effectiveness of various different healing agents on SLS inflamed skin!

SCS is similar to SLS, its main difference is that it is derived only from coconut oil and uses a blend of fatty acids that exclude the lauric fatty acid. Both surfactants are produced using the same process of treating fatty acids with a type of sulfuric acid and then neutralized with an alkali, but because of the lack of lauric fatty acid in SCS, companies can claim on their label that their products are SLS-Free.

Sodium coco sulfate (SCS) is a blend of:

More people are concerned about Sodium coco-sulfate harmful?Sodium Coco-Sulfate, not your average sulfate.

What do sulfates do?

Sulfates are surfactants, which means they attract oil and water. They are made up of two main parts: a head that “loves” water and fatty acid tails that “hate” water and “love” oil. They form bubbles around grime and dead skin cells, which allow them to be removed from your skin and scalp and washed away with water. They’re essentially what makes most shampoos sudsy and foamy. If you’re thinking, I like that sudsy-foamy-delicious shampoo experience! We get it–so do we.

So, what’s the difference among the sulfates?

The essential difference is the length of the fatty acid tails. For example, Sodium Lauryl Sulfate is made up of a single length of fatty acid called lauric acid. This is the most efficient of the cosmetic sulfates, which means it’s great at forming bubbles around dirt and grime. Sodium coco-sulfate is derived from a blend of fatty acids, including lauric acid; it is less efficient and among the mildest of the cosmetic sulfates.

Why do we use sulfates?

Though it hasn’t been subjected to as much testing and scrutiny as has more widely used ingredients, sodium coco-sulfate does seem to be a safer, gentler alternative to SLS (it is the primary sulfate used in baby shampoos).

In summary: sodium coco sulfate contains SLS as a predominant component, with all the concerns that are linked to that chemical. Basically it is just another way to hide SLS in formulations with yet another name. Both sodium coco sulfate and SLS are synthetic detergents and should never be part of any natural cleanser. Natural products that are kind to your skin, and environmentally friendly, will not contain lauryl sulfate, laureth sulfate, coco sulfate or any of the long list of other synthetic detergents.

Although the marketing term ’coco sulfate’ is used to indicate it is derived from coconut oil it is also made from palm oil. Increasingly people are saying no to palm oil because of deforestation and the destruction of habitats containing rare and endangered species. And certificates of sustainability mean little if the forests continue to disappear.   Unfortunately manufacturers can use palm oils to make products like SLS and SCS without the consumer being aware, and while they may declare there is no palm oil in their products the ingredients they use may have been made from palm oil fatty acids.

XI’AN AOGU BIOTECH CO.,LTD is devoted into the research and innovation in natural nutritional supplements ingredients. Our own factory and lab with the strict quality control system to ensure quality stability and real price of sodium coco sulphate. At the same time, we have our own source for the raw material to make sure the production ability.